Each day seems to bring more news of rising opioid deaths and the dangers of opioid use. Due to its overdose deaths, the one opioid that appears to make headlines frequently is fentanyl.

What is fentanyl? Why is it so dangerous? Learn more about the science behind fentanyl and other opioid drugs. This article will walk through the information needed around different opioids, including fentanyl.

Opioids come from the plant opium poppy and date as far back as 5000 B.C. In ancient times and throughout early modern history, people consumed or smoked opium poppies as a form of pain relief. Some ceremonies utilized opium poppies as part of the ritual.

Morphine is the core molecule of opium. It is the root of the current opioid crisis. Leading up to the early 20th Century, doctors and medical professionals used morphine to provide pain relief, without modifications to the molecule or the drug itself, after surgery and to limit the pain from injuries during healing.

However, the current opioid crisis did not begin until scientists began making modifications to the core molecule of opium poppies. These changes led to the addition of other drugs to the opioid family.

At the base of heroin, there is a modified morphine molecule. Scientists made some chemical adjustment methods to create heroin from this modified morphine. It also created a more dangerous and addictive drug than the original morphine.

Scientists created heroin as an alternative to morphine and hoped that the modified drug would provide additional pain relief when morphine fell short. They designed one of the most addictive drugs ever known.

The addictive qualities of heroin are because this drug crosses into the brain at a faster rate than morphine ever could. A view of the heroin molecule reveals that there is still a morphine molecule, but two more molecule groups join it. These two new molecules help the drug cross into the brain more quickly.

We define a synthetic opioid drug as one created primarily in a lab using various source compounds but not morphine.

The creation of methadone was a direct result of a trade embargo by the Allied forces, leaving Germany to scramble for new medications that would provide pain relief without access to natural morphine. They created methadone to treat soldiers. Methadone was introduced into the United States in 1947 as an analgesic (Dolophine®).

Fentanyl, developed in the 1960s, is also one of the fully synthetic forms of opioid drugs with various medical applications. Its purpose was to help manage chronic pain and use it for patients during surgical procedures.

Fentanyl’s liquid form offers fast relief.  It is also available as a patch that delivers relief over a more extended period. When comparing the potency of an opioid, it’s always compared to the effectiveness of morphine. Fentanyl is 100 times more potent than morphine, making it effective at pain relief and highly addictive.

The high potency of fentanyl makes it easier to overdose. This synthetic drug is also dramatically less expensive than morphine. Due to the lower price, dealers see higher profit margins by mixing fentanyl with other drugs.

When a person builds up a tolerance to opioid drugs, they need more to receive the same high. However, the body can only withstand so much trauma to the brain and respiratory system.

When fentanyl attaches to the brain, it uses a lot of force, leading to an overdose and death. The effect of fentanyl also comes quickly, leaving the user unable to realize an overdose has occurred and take steps to save their own lives. In most cases, death from opioid use and fentanyl, in particular, is unexpected and hard to stop.

When someone is addicted to fentanyl or another opioid drug, the time to seek treatment is now. With the potency of fentanyl, it is only a matter of time before the use of the drug leads to an overdose. At Magnolia Medical Group, we can help. Take the first step and reach out to us today! 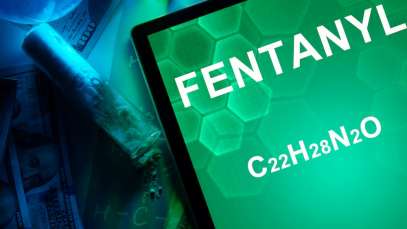 What Makes Fentanyl So Dangerous?

How to Tell if Someone Has an Opiate Addiction